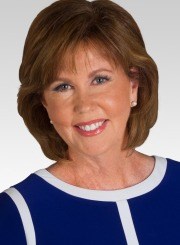 Early this month, Gayle retired from WFLA-TV where she’s been on air here in the Tampa Bay area for 38 years. Sierens joined the Channel 8 staff in 1977 as a weekend sports anchor/reporter and became the 11PM weekday sports anchor in March of 1983. In addition to these responsibilities, she freelanced as a play-by-play announcer for ESPN.

In October of 1985, Sierens made the transition from sportscaster to news anchor. Prior to joining WFLA-TV, Sierens was with WFSU-TV in Tallahassee, Florida. She received a B.S. degree in mass communications with a minor in speech communications from Florida State University.

Currently, Sierens is on the board of directors of the Judeo-Christian Health Clinic and the Advisory Board for Operation Helping Hand.

Gayle was the winner of the Florida Holocausts Museums “Loebenberg Humanitarian Award.” She was also named Humanitarian of the Year by the Judeo Christian Health Clinic. The Association of Fundraising Professionals created the “Gayle Sierens Volunteer of the Year” award in her honor. She was named a “Woman of Distinction” by Girl Scouts of America, Suncoast chapter. She also serves on the Advisory Boards for Elon University’s School of Communication, Village Partners International, and the Junior League of Tampa. Tampa Mayor Pam Iorio also proclaimed January 7th, 2007 Gayle Sierens Day in honor of her 30 year anniversary with WFLA TV.

Sierens was the first woman to do play-by-play for an NFL football game and also appeared on “NFL Live” on NBC.

Gayle is a proud Seminole and has assisted with the Bobby Bowden booster tour in the past. Please assist me in congratulating Gayle as our local Alumnus of the month!