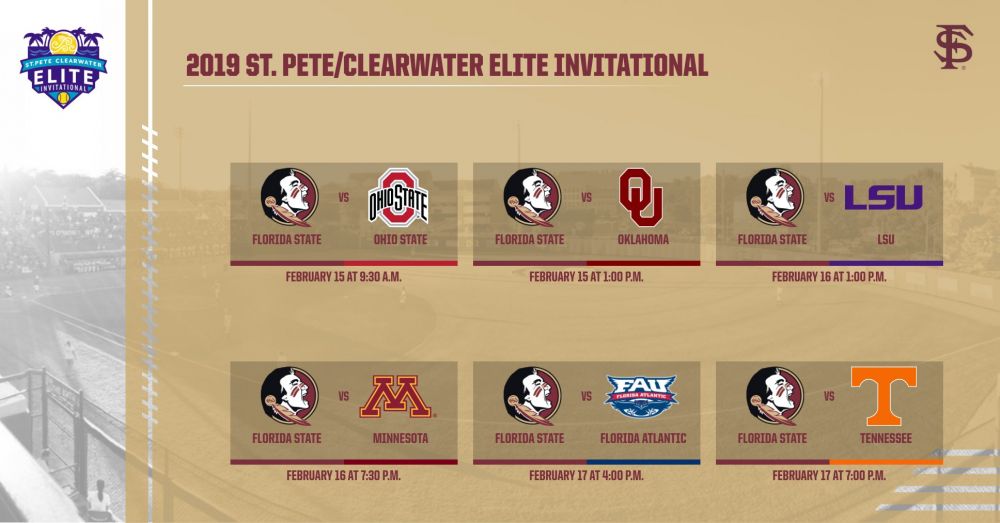 TALLAHASSEE, Fla. — The defending national champions will again have a strong out-of-conference schedule in 2019 as ESPN has announced the full lineup of teams, dates and matchups for the inaugural St. Pete/Clearwater Elite Invitational on February 14-17 at the Eddie C. Moore Complex in Clearwater, Fla. All games will be broadcast on the ESPN family of networks, with more specific information coming at a later date.

Florida State ended the 2018 season with the No. 1 RPI in the nation and will play a total of six games in the Invitational, including five against teams that finished last year in the Top 25 of the RPI – No. 4 Oklahoma, No. 10 Tennessee, No. 11 LSU, No. 23 Minnesota and No. 25 Ohio State.

“We are honored to be invited to St. Pete/Clearwater Elite Invitational,” said FSU head coach Lonni Alameda. “We have been really excited about the growth of softball over the years and it is a cool opportunity for fans of the game to see this kind of an elite-level tournament held in our region with such a great list of teams competing. We are excited to be one of the teams participating in the inaugural tournament.”

The outcome of Florida State’s games with Minnesota and Ohio State will count toward the 2019 ACC/Big Ten Challenge that will be occurring that same weekend throughout the southeast.

The remainder of the 2019 Florida State softball schedule will be announced at a later date.