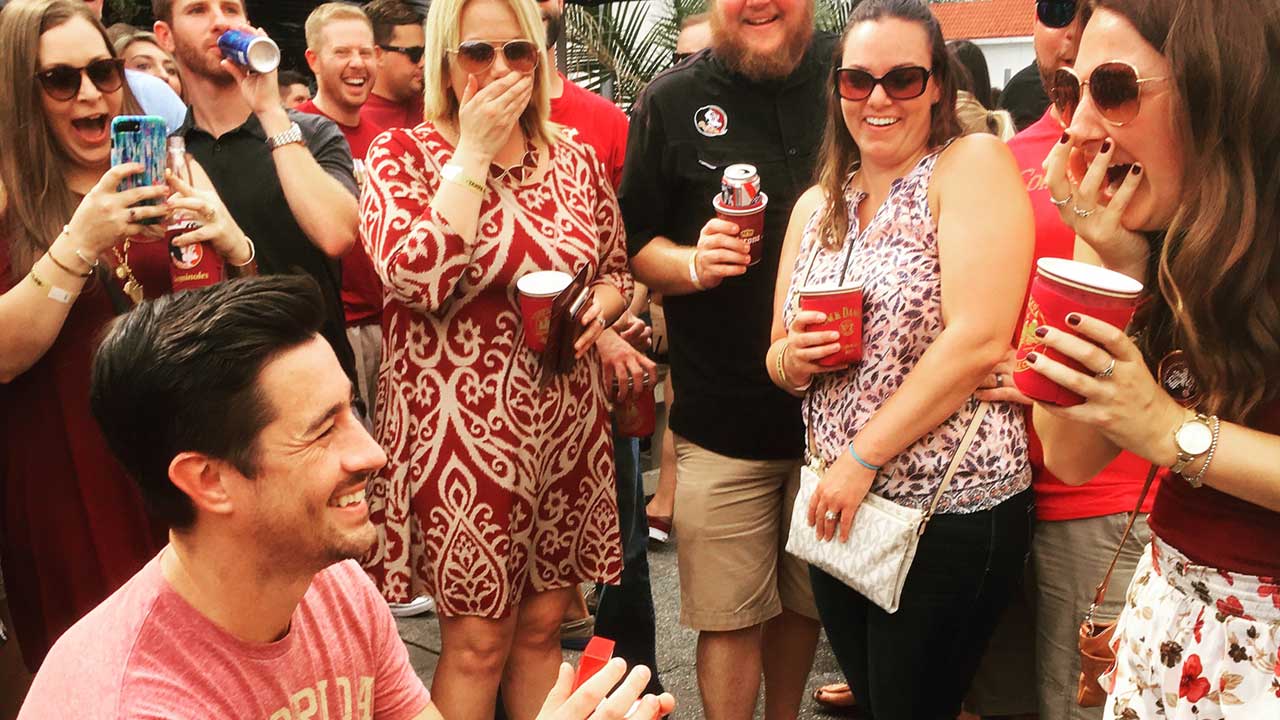 14. This year’s Block Party on Aug 10 will be number 14. After 14 years of Block Parties and tens of thousands of Block Partiers over the years, there are probably dozens of fascinating stories, myths and exaggerated urban legends in Block Party lore. Most of the really entertaining stories either never happened, or truly “never happened” (particularly after some social-media-under-the-influence posts are deleted).

Still, some stories surface year after year, and if the cliche about finding fire where there’s smoke is to be believed, perhaps there might be elements of truth to these Block Party urban legends. One of the classic Block Party myths is that amazing and heartwarming (or at least, super cool in a Seminole kinda way) tale of the guy and girl who randomly met at a Block Party, got engaged at a future Block Party, and now live happily ever after!

So we wondered, could it be true?

We all love a good football story. When football story and love story intertwine, the result is even sweeter. NOLE-lore has it that the Tampa Bay Seminole Club’s annual Block Party always sees at least one couple get engaged. When the ball and chain are garnet and gold, there’s no question the couple found the love of a lifetime.

FSU grads Meredith and Kevin Smith have the quintessential Seminole-love story. The pair, who met while studying abroad in Italy, only spoke a couple of times during their FSU days. But then fate caused Kevin and Meredith to randomly bump into each other again – in all places – at Gaspar’s Grotto during the 2013 Block Party.

They reconnected and spent a lot of time chatting with each other at the Block Party. As they talked, Meredith and Kevin realized they had mutual friends and lots in common…and the rest is, as they say, Seminole history.

During the next four years the couple experienced a lot together, from the excitement of great trips around the country and other countries, to the chill relaxation of Netflix/HBO binge watching sessions. And then the time seemed to feel ripe for Kevin to pop the question. But how?

The 2017 Block Party was coming up, and Kevin knew it would be the perfect way to surprise Meredith with a special question. His idea called for a lot of secret keeping: “He was very swift and slowly added family members to our Block Party plans,” shared Meredith. Kevin would explain that “A” and “B” family members decided they wanted to go to the crawl after hearing so many great stories about the event. Meredith didn’t suspect a thing.

Gaspar’s is typically the grand finale and final pub crawl stop for most Block Party attendees, but Kevin knew he wanted to propose before the end of the night. That romantic Nole, who’d spent weeks meeting with Meredith’s friends to talk rings and proposal, orchestrated a plan to do a reverse pub-crawl for their group so that they didn’t have to deal with as much of a crowd.

Having crossed all his t’s and sharpened all his spears before the 2017 crawl, Kevin let Gaspar’s Grotto know in advance of his plans to pop the question, and Gaspar’s staff was on board with his plan. Meredith, still suspecting nothing, had her back to Kevin as she was talking with a friend. And then Bob Seger’s “Night Moves” started playing in the background, and Meredith heard Kevin inhaled deeply.

“I turned around and he was on bended knee looking up at me,” recalled Meredith. In complete shock, she uttered “yes” before he’d officially asked the question; “I felt like time slowed down and I couldn’t hear anything.” For the record, Kevin expressed how Meredith is his best friend and he wants to be with her forever. So, she said “yes” again. “It was special to have so many friends and family members there,” noted Meredith; “We celebrated with them all day and enjoyed the tons of random strangers cheering us on.”

The couple, who married in October of 2018 during a destination wedding at Lake of the Ozarks, is excited to attend this year’s Block Party on August 10th—their first as a married couple. Their wedding, attended by friends from their studies both abroad and on FSU’s Tallahassee campus, had all the dressings of a Seminole event. While the Noles played the Canes that day, Meredith and Kevin skipped tunes like the electric slide in favor of FSU’s War Chant. “It was a laid back, lakeside day,” Meredith added.

Gaspar’s and the Block Party will always be a special place for the couple: “Every time we go we’re flooded with good feelings and great memories.” The 2019 Tampa Noles Block Party, which starts at The Italian Club of Tampa, promises all the feels and memory making. Visit the Block Party ticket website to score tickets to Tampa’s largest Seminole party. Who knows, with the right night moves, you might score the garnet and gold love of a lifetime.