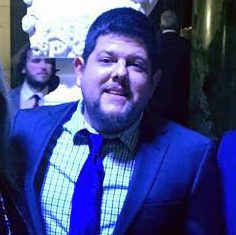 Congratulations Anthony Cormier on being selected as our December Alumni of the Month!

In October 2016, Anthony Cormier (BS, Creative Writing, 2000) accepted the fourth Pulitzer Prize awarded to a Florida State alumni. Cormier, a writer for the Tampa Bay Times, won the award for his part in a journalistic investigation into Florida’s mental health system.

According to the FSU News,

“He earned the highest award in American journalism by immersing himself in the day-to-day realities of the state’s six main mental health hospitals. He discovered disturbing secrets there: staffing shortages, violence, neglect, abuse. Patient deaths.

Cormier and two colleagues pursued the story for more than a year, even when it was unclear what exactly they were uncovering. But they pushed forward one day at a time, making incremental progress and following leads to a larger picture. Their stubborn persistence to find the truth earned a Pulitzer Prize in Investigative Reporting.

”The FSU News spoke with Cormier at length here:

We also had the opportunity to email Cormier a few questions:

What does it mean to write for the Tampa Bay Times with its history of great reporting?
“I am so grateful to work for the Times. It is an independent voice that retains an unceasing dedication to journalism that affects change in the world. I cannot count the number of great writers who have passed through this place and who still remain here. It is truly, truly special.”

Who are writers you look up to?
“So many. I work with one of the finest investigative journalists in America, Michael LaForgia, and have always looked up to the standard-bearers in our industry, people like David Barstow of the New York Times and Katherine Boo, formerly of the Washington Post.”

Why Florida State?
“I chose Florida State because I saw how it was building its writing program. There were some heavy-hitters involved with the program when I started at the university and it has been a joy to watch so many successful people come out of it.”

How did you join the Times and end up in the Tampa Bay area?
“I have been a journalist in Florida for about 15 years and always had an eye on the Times. It is one of the last independent American newspapers with a deep history of incredible storytelling. A few years back, a door opened for me here and I couldn’t be happier about the opportunity.”

Unfortunately, Cormier will be leaving Tampa in 2017 as he recently took a job with Buzzfeed. But for his amazing accomplishments in journalism, Anthony Cormier is the Tampa Bay Seminole Club Alumni of the Month for December 2016.